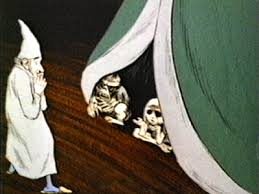 As Ebenezer Scrooge passes through a gauntlet of four ghosts (including Jacob Marley) on the  path of redemption, the takeaway is clear: be generous of spirit always, and especially during the holiday season. Dickens of course had a broader message as well; he was a social critic first and foremost. His own childhood trauma in workhouses compelled him to write about the miserable circumstances of poverty in the wake of the Industrial Revolution. Sometimes Dickens might be no more subtle than Michael Moore in getting his point across, but his relevance is undiminished even after 160 years. I read A Christmas Carol every year. As half of all Americans have officially descended into poverty, I’m paying special attention to what Dickens, the poverty expert, has to say.

Dickens wasn’t just writing a Christmas story. It was also a rebuttal of the economic theories making the rounds at the time, advanced by followers of Thomas Malthus. In some ways they remind me of modern conservative talking points and positions. In 1803 Malthus wrote An Essay on the Principle of Population (and revised it several times) which linked population growth with resource limitations. When unchecked population growth outpaces food production, misery and vice are the mechanisms which resolve the imbalance. Necessary but counterproductive poor laws (welfare) “create the poor which they maintain” (with no acknowledgment of the outright cruelty of those institutions). Lack of virtue and poverty go hand in hand. When Scrooge angrily asks his nephew, “Why did you get married?” he is really accusing him of a grave lapse in character–the audacity to get married before he is fully able to support a family. That was the view advanced by many economists, and Malthus, at the time.

Dickens is addressing Malthusians with this infamous exchange:

“Are there no prisons?”

“And the Union workhouses?” demanded Scrooge. “Are they still in operation?”

“They are. Still, I wish I could say they were not.”

“The Treadmill and the Poor Law are in full vigour, then?

“Oh! I was afraid, from what you said at first, that something had occurred to stop them in their useful course. I’m very glad to hear it.”

“Under the impression that they scarcely furnish Christian cheer of mind or body to the multitude, a few of us are endeavoring to raise a fund to buy the Poor some meat and drink, and means of warmth. We choose this time, because it is a time, of all others, when Want is keenly felt, and Abundance rejoices. What shall I put you down for?”

“You wish to be anonymous?”

“I wish to be left alone. Since you ask me what I wish, gentlemen, that is my answer. I don’t make merry myself at Christmas, and I can’t afford to make idle people merry. I help to support the establishments I have mentioned: they cost enough: and those who are badly off must go there.”

“Many can’t go there; and many would rather die.”

“If they would rather die,” said Scrooge, “they had better do it, and decrease the surplus population. Besides–excuse me–I don’t know that.”

“It’s not my business. It’s enough for a man to understand his own business, and not to interfere with other people’s. Mine occupies me constantly.”

The dialogue foreshadows Dickens’ plea for the salvation of the poor, when the Ghost of Christmas Present reveals the demon children Ignorance and Want beneath his robe. “Want is keenly felt” by the poor, and Scrooge himself is Ignorance: “I don’t know that….It’s not my business.” Even Dickens’ solution is contained within the dialogue. Malthus’ theory is one of scarcity: food production will never meet the needs of “the surplus population.” Thus Engels called it “a system of despair.” The antidote to Malthus’ despair and scarcity is embodied by the metaphor of Christmas: Abundance. During “this festive season of the year,” the generous of heart confront Ignorance of poverty, address Want with charity, and “Abundance rejoices.”

Scrooge’s shift from the orientation of Scarcity to Abundance is so powerful because the revelation reverberates outward through renewed family ties, reparations, saving the life of Tiny Tim, and the effect on those who see “the alteration in him.” Michael Patrick Hearn (The Annotated Christmas Carol) writes,

The solution was psychological, not political. The individual can correct injustice. Why wait for society to do it? While others believed that if one changed society, one changed the individual, Dickens saw no need to overhaul society until there were better people to live in it

In Scrooge, joy and compassion are the well-spring which counteracts ingrained notions about the status quo. Acting out a spirit of abundance, that there is “enough for everybody,” reduces fear and strengthens ties to other people. It’s more productive than a zero-sum attitude of “if you have more than I’ll have less.” Given the cruelty that Dickens underwent as a child, it’s amazing that he kept such an open heart.